Digital identity in your pocket

DigiLocker is a secure cloud-based platform with over 50 million users. It fetches original documents and certificates issued by the central and state governments, as well as from private organisations in India. Besides being a boon for citizens by having their documents at their fingertips, DigiLocker aims to reduce the administrative overload for bureaucrats and foster paperless governance.
‍

To solve problems for a billion people, we needed all the firepower we could get our hands on. Experts from the DigiLocker team joined us, and we got the ball rolling with a diverse sprint group.

Five experts from the DigiLocker team participated in the sprint — two product managers, a tech lead, a partner onboarding lead, and the director of the project. Having a good mix of subject-matter experts from DigiLocker helped us quickly navigate the ins and outs of the app and generate a wide range of new ideas.

We added three members from our team to round out the group — our founder Robin Dhanwani, who was the main facilitator; Hammad Jilani, who co-facilitated and conducted user tests; and Chaitanya Alluru, a senior designer who designed and built the prototype. 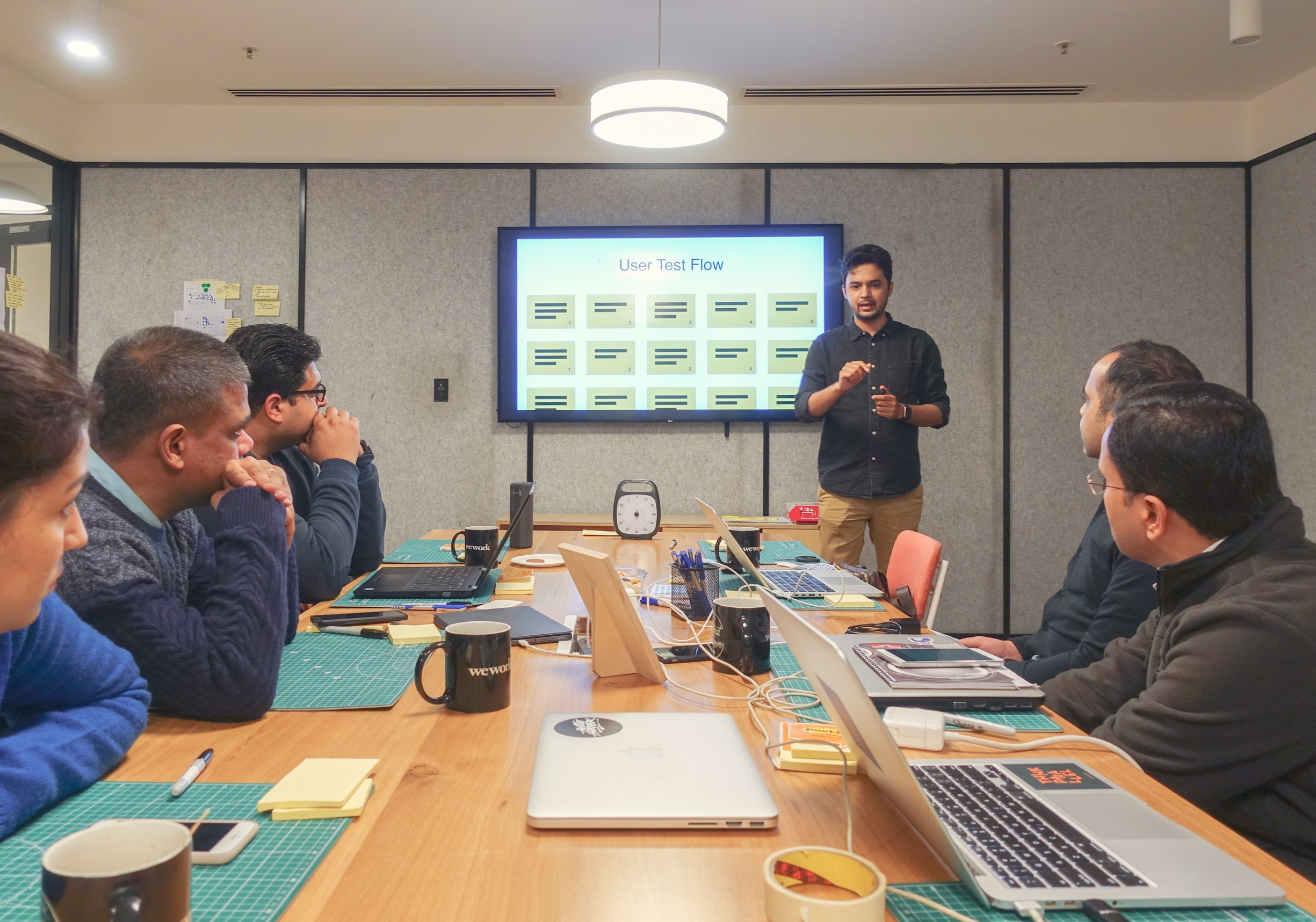 We began the Design Sprint with a discussion on the challenges pertaining to the product with the DigiLocker team. A product serving 50 million users that was still in its nascent stages was bound to have a lot of inputs on the challenges and product goals. Some of the interesting bits that came were:

Aligning on our goals

Looking into these challenges helped us identify key opportunities to work on during the sprint. 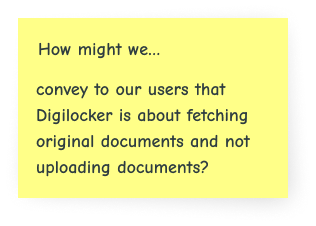 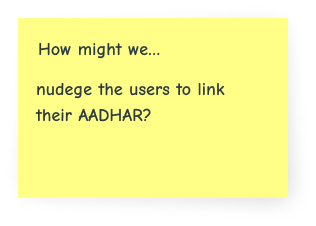 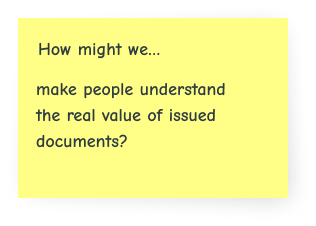 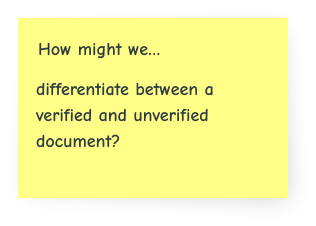 Then we set out to define a product goal to align the team on common objectives. The team decided on their 2-year goal. 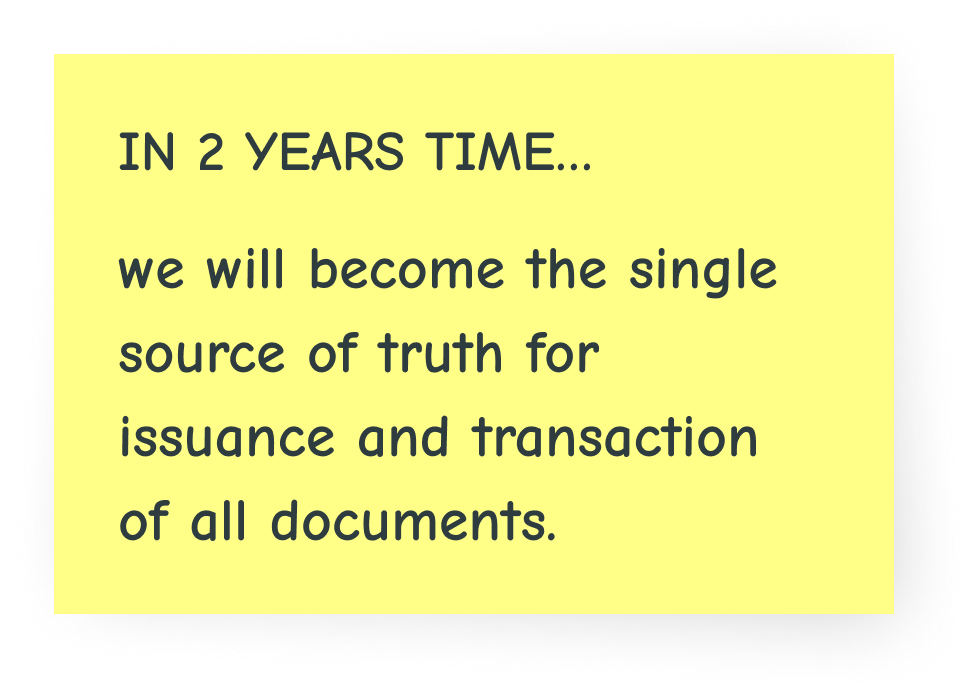 We then worked with the team to define sprint questions, which we would check during the user testing. 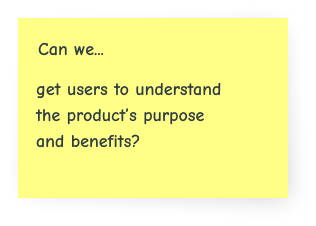 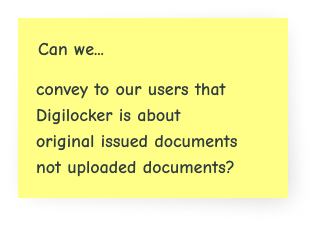 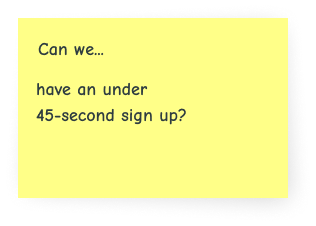 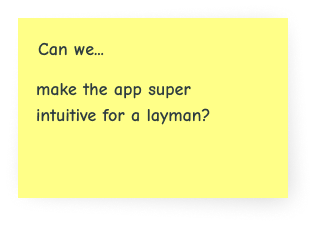 It was now time to dig deeper. We then mapped the challenge, from the first touchpoint of discovering the app to signing up and linking a document to the user’s account.

Working on solving a problem to make lives simpler for millions of Indians got everyone excited, and ideas flowed in the form of sketches and Post-it notes.
‍
We built on each other’s ideas and created a storyboard of how new product workflows should look. It was an intense exercise to align the team to one workflow that everyone believed in and wanted to test. 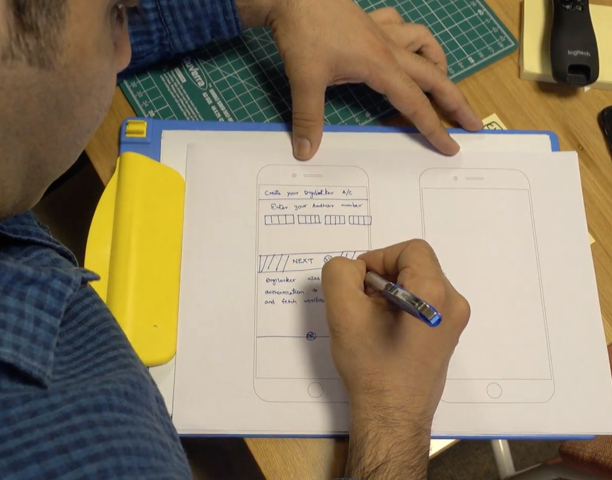 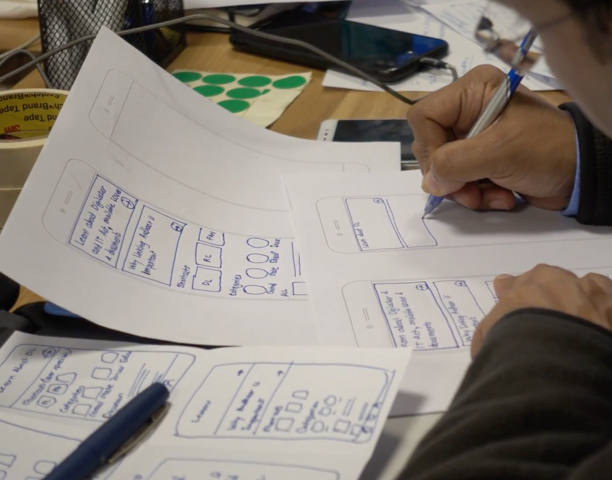 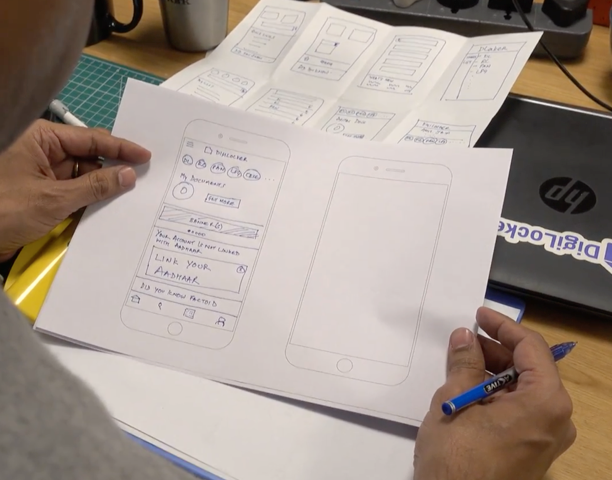 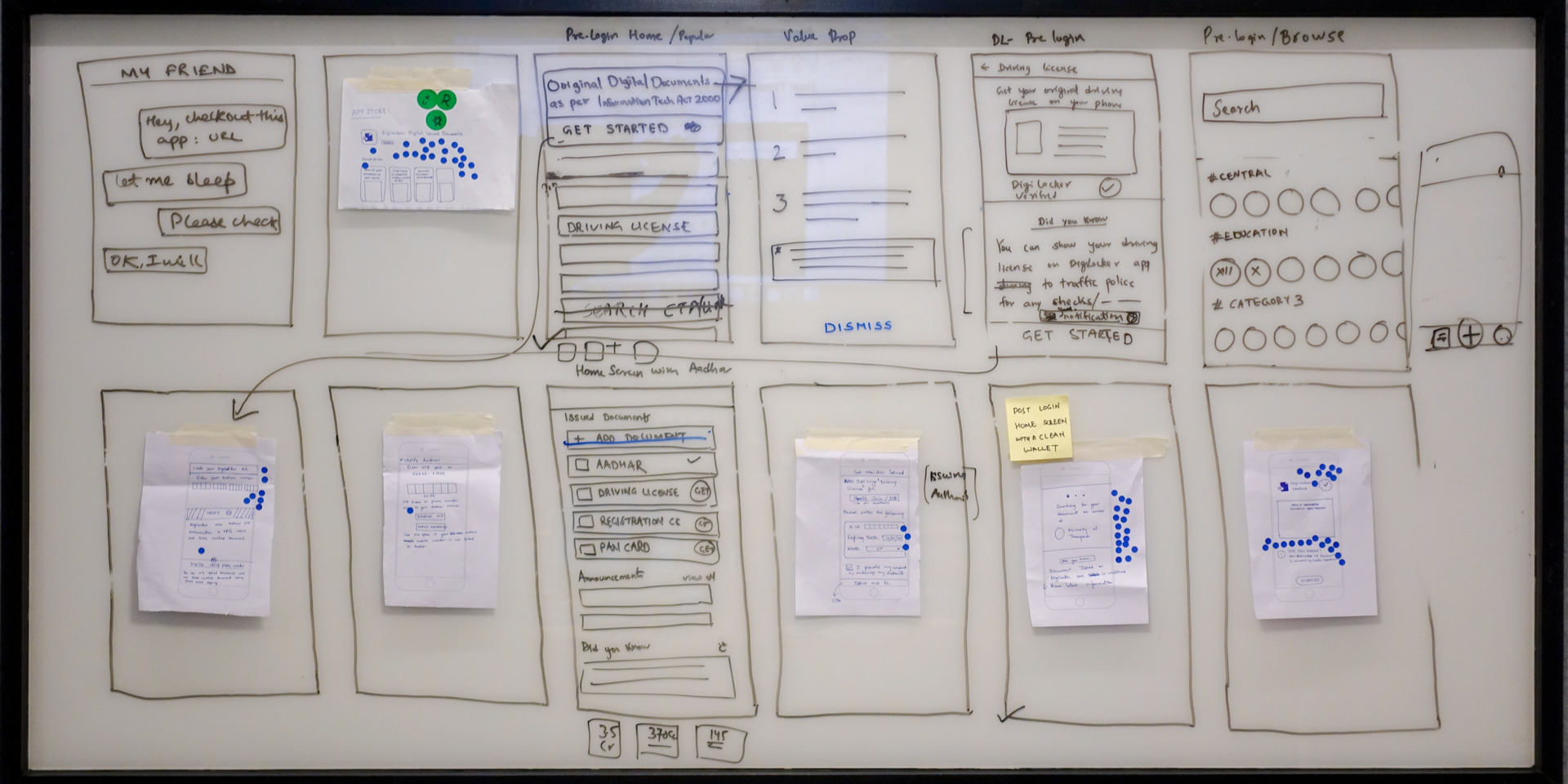 In a day, we managed to bend time and space to churn out a digital prototype. The air was abuzz with enthusiasm to showcase the prototype to users and get feedback. 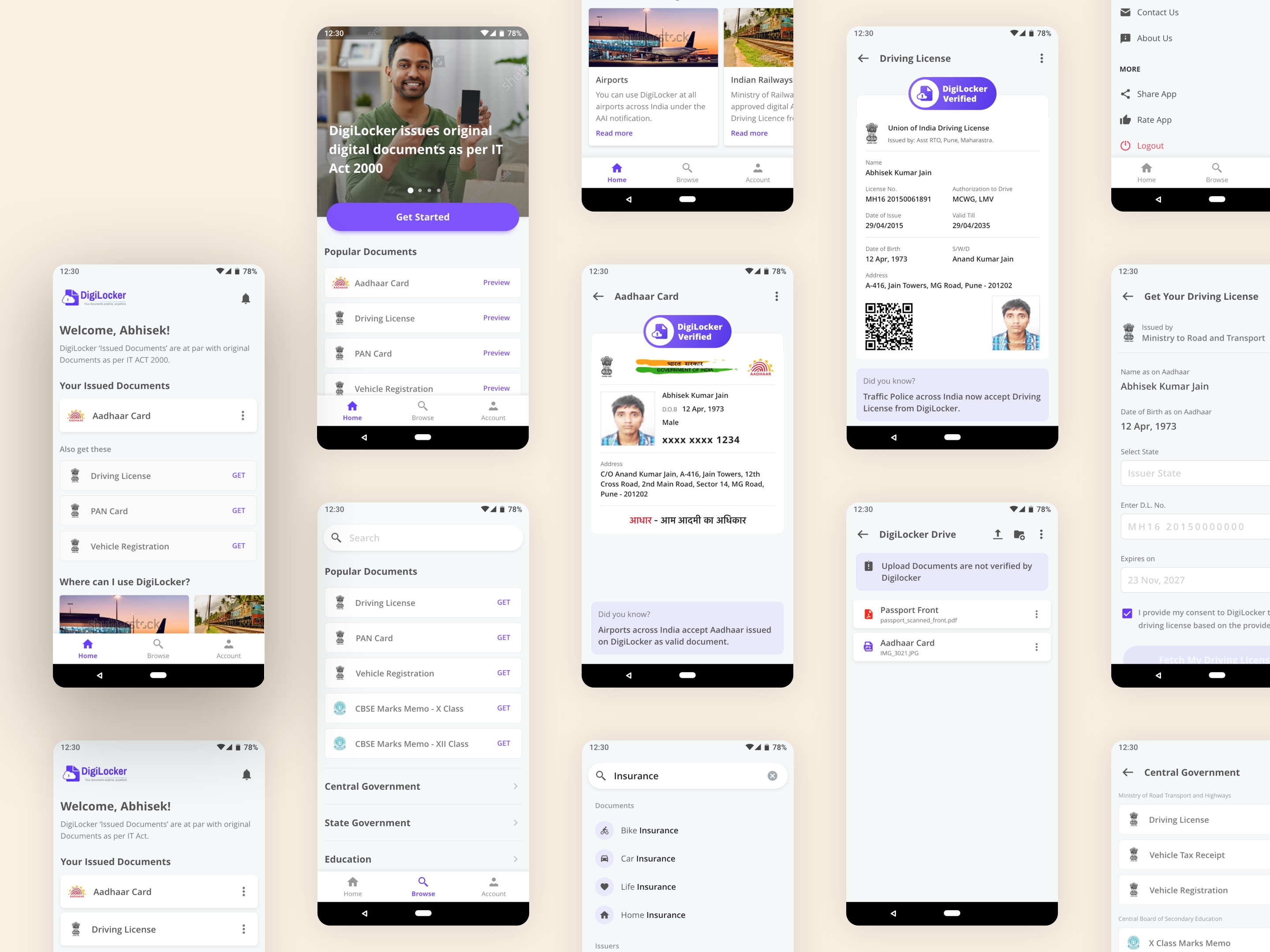 We recruited 5 users across different demographics — from young students to working professionals, from entrepreneurs to homemakers. Since we wanted to test not just the prototype's usability, but also its explainability, we recruited users who had previously not heard of DigiLocker.
‍
The overall feedback on the new user experience was extremely positive. All of our users liked the concept and rated the experience a 9/10 on average. One of the test users even mentioned that if something like DigiLocker exists, “It’s too good to be true”. 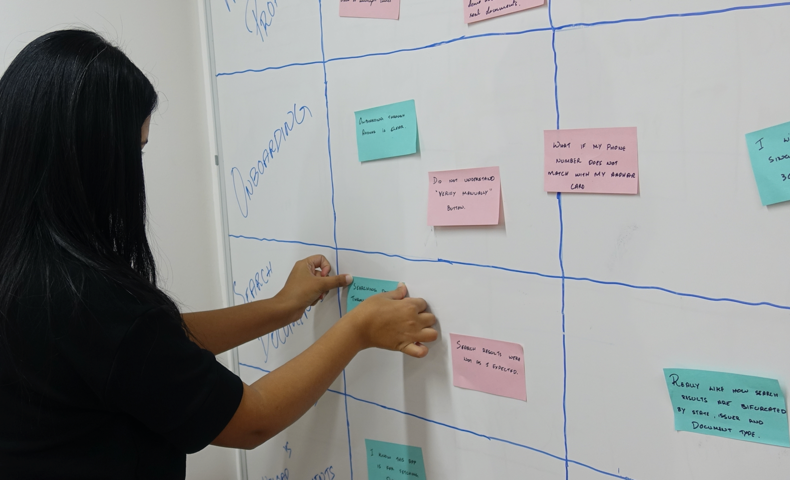 We went into the iteration week focusing on the feedback we received from the users. We improved the prototype and tested it again with a new set of 5 users. Most of the concerns that came up in the results of the first sprint seemed to be resolved in this round of testing, and the results were really positive.
‍
Here is what users said in second round of testing:

“I think the new sign up flow is extremely intuitive and easy to use.”

90% of the testers completed the sign-up process without any difficulties.

All users who we tested mentioned that they understood the purpose of the app.

“I think searching for documents across different government departments is simple. I would love to use DigiLocker to fetch all my documents now!”

80% of our users were able to search and fetch multiple documents.

Outcomes of the sprint

When the DigiLocker team put out the redesigned app, we were so excited to see it top the App Store charts! 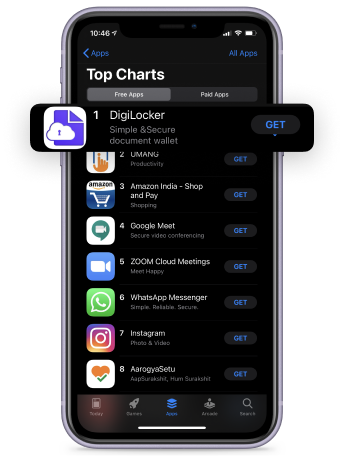 Amit Ranjan (Architect at Digilocker, and co-founder at Slideshare) also raved about the sprint on Twitter, saying that it not only improved the app’s design but also taught the DigiLocker team how to think about design themselves.

The stats also back up this sprint’s success. In the six months since this redesign, the DigiLocker app has seen amazing improvements:

If you heard that a government body was able to improve and test their digital product over a week, you might find that unbelievable. But working with the DigiLocker team wasn’t any different than working with a startup with lots of energy and enthusiasm. We are proud to partner with DigiLocker on this project and contribute our bit to making a digital, paperless India.

Read more about this Design Sprint on Sprint Stories.

I found the Design Sprint extremely productive. We discovered things we thought we knew, but actually didn’t. It gave us a chance to implement a lot of ideas that were swimming around in my head and solve problems plaguing us for 4 years. I really liked working with Parallel. They brought out the creative side in me that I didn’t know existed.